I am like most people – I like to see my tax money used effectively. I like having an impact on other people’s lives, whether it is in my own community or somewhere else in the world. I care about what happens in Afghanistan or the Ukraine. But I am also a development practitioner and chose to remain in this field, resisting the great tug more than once in my career to cocoon myself in academia. In the end, I am more rogue than scholar. But the road is pockmarked with pitfalls and unwanted forks – the lesser of two evils, the optimal vs. the ideal, the possible vs. the cynical, the pragmatic vs. the academic, the ‘something is better than nothing.’ I write reports instead of journal articles. I am constantly asked to give a little more because I do not have a 9-5 job.

But what keeps me going? The debate on achieving results has picked up steam in the last decade. I could feel justified in my endeavor but I cannot agree with the tyranny that has developed around it in response to the demands of donors and development agencies. Check out the ‘big push forward’ (http://bigpushforward.net) for the bigger picture. Who is calling the shots? Who is asking for the evidence? And anyway, results to me are not the ones you tick in a logframe; it is the enduring change in the lives of vulnerable people — and not just today and not just the ones we have counted — but for their children.

The development industry has operated for years now on a project basis with start and end dates. Funds come and go for one year or five years. Donors have a right to know how efficiently and effectively funds are being used. Taxpayers want to know too. That is why we have evaluation (and I am an evaluator!). But I ask myself, not sometimes but often, to what kind of development am I contributing? Donors have strategies and budgets that rationalize their decisions to change priorities, country focus, population groups, or sectors. Their money could be gone in one, two or three years. They pack up their results and move on. The onus of sustainability in a two to three year timeframe is something the community needs to figure out with project management – how to replace parts, raise funds for their organization, or continue advocating for policy change. That is the development practice reality, although I concede there are some ‘smart’ donors and foundations whose understanding of development processes gets them beyond the tacit expectation of making results happen ‘big and fast.’ 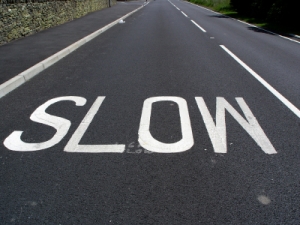 I am not arguing for slower development but I would like to see a ‘slowing down’ to look critically at issues that are so deeply anchored as practices in development. And it would not be a bad idea to borrow some of the principles of the slow movement anyway (slow food, slow cities, slow schools, etc.) – connect to life, embrace the infinitely complex whole. How do we do that?

Some years ago, I helped make an important shift with one international non-governmental organization (INGO), CARE International. In our jargon, it was the shift from a “project approach” to a “program approach.” At some point, we recognized what the project mosaic was doing to the populations being served by CARE. It was like playing a game of hop-scotch – we are in district A for three years, district B for three years, district C for three years, and then 10 years later, we find ourselves back in district A with another donor. Had the lives of that community changed at all as a result of the first donor? It was all patchwork. In some cases, we got lucky and managed to keep a pool of donor funding in one region long enough to witness deeper change and only if the interventions truly built on cumulative learning for the villagers and for the NGO.

Sometimes we need to stare the problem in the face long enough to wake up. Are we addressing only the symptoms of poverty and vulnerability? Are we prepared to take on underlying or root causes that keep people poor? Social norms that exclude certain population groups, gender discrimination, poor governance, global market forces that have an exploitative effect on the poorest, to name a few. We talk about sustainable impact that referentially is about development projects. It does not equate with social change and a transformation of the power relations at the heart of uneven development. And it does not need a social scientist to know that social change processes take time, are complex, and non-linear. It is not possible to focus on one aspect of people’s lives, such as access to quality health care, but ignore the gender norms in the household where the problem begins. There is an integratedness to development that makes it very difficult for aid agencies to focus on one sector or set of interventions and obtain lasting results.

In a program approach, we essentially agreed to:

And who gets to monitor, evaluate and learn from the process? Obviously, we all do. We are all co-creators. In a program approach, methods are not in competition for first place. Neither one nor the other has an inherent superiority. We must start by listening to a wider spectrum of voices and perspectives and when it gets messy, slow down, step back, and don’t go digging into your toolbox for an answer.

Mary is an independent consultant with 20 years of experience in the field of international development. Mary has worked mostly within in the NGO sector, supporting organizations in evaluation capacity, sustainable impact, and facilitating social change towards eradicating poverty and social injustice. She holds a Ph.D. and Masters in Geography from Clark University.